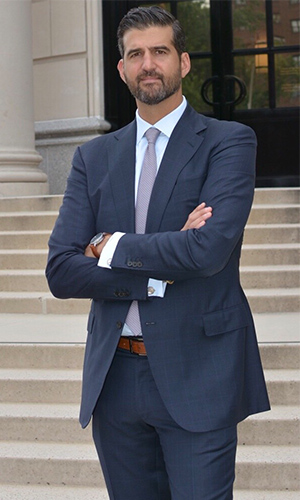 Adam received his law degree from Brooklyn Law School in 2002, where he was a member of the American Trial Lawyers Association Brooklyn Law School Trial Team. During that time, he spent a semester studying at the University of International Business and Economics in Beijing, China. He received his undergraduate degree from Union College in 1999. Adam is admitted to practice law before the Courts of the State of New York and the United States District Courts for the Southern and Eastern District of New York. He is a member of the New York State Trial Lawyers Association, the Westchester County Bar Association, where he is the co-chair off the trial lawyer and tort committee, and the American Association of Justice.

Prior to founding Fiedler Deutsch, LLP, Adam spent 10 years at one of New York’s largest personal injury firms as their senior trial attorney. The eight years before that he worked at two prominent New York City firms where he focused on mass tort, product liability, personal injury, medical malpractice, contract and general commercial litigation, and where he became the youngest associate in the history of each firm to first chair a trial. He clerked for the Honorable Sherry Klein-Heitler, now the Administrative Judge of the Supreme Court of The State of New York, New York County as well as the United States Attorney’s Office for the Eastern District of New York, The Bronx County District Attorney’s Office, and the New York City Law Department.

Adam lives in Scarsdale, NY with his wife, two sons and their doberman.